WATCH: The heartwarming moment featuring a boy who saved his cousin's life was the highlight of the Toy Show

We feel confident in saying that this moment reduced almost everyone to tears.

Everyone who watched seem to enjoy themselves throughout, but there was some stand out moments too.

END_OF_DOCUMENT_TOKEN_TO_BE_REPLACED

Our personal favourite moments include young Michael who met his sporting hero in Davy Fitz, or Cormac the Lego enthusiast.

All in all, it was a class show.

But one moment stood out above the rest in terms of how emotional it made us.

And that moment was between two cousins - Scott and Grace.

Grace, a six-year-old who was the younger of the two cousins was undergoing bone marrow treatment for leukemia this time last year.

Her eight-year-old cousin, Scott, gave her the bone marrow transplant.

When asked by Ryan Tubridy why he did such a thing, Scott replied: "I wanted to save her life." 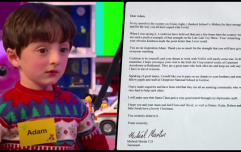 END_OF_DOCUMENT_TOKEN_TO_BE_REPLACED

And from that moment onward, the entirety of Ireland had a tear in their eye...

It got better from there too.

Scott, who is a massive rugby fan, was greeted by Rob Kearney, Tadhg Furlong and Sean O'Brien, fresh off the back of their mammoth victory against New Zealand.

Rob Kearney, with his arm around Scott's shoulder said: "People call us heroes on the rugby field, but you're the real hero son."

After giving a special gift to his cousin Grace, Scott gets a present from @irishrugby on the #LateLateToyShow pic.twitter.com/K91Ku4AgMR 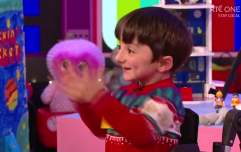 END_OF_DOCUMENT_TOKEN_TO_BE_REPLACED

It really was a lovely moment.

The Irish rugby team also gave him tickets to their Six Nations game against France, and invited him to an exclusive training session, and gave him an Irish jersey signed by the team.

And naturally, Grace was invited too.

The Big Reviewski || JOE · TBR Spotlight: The Falcon and the Winter Soldier Episode Five - 'Truth'
popular
The 50 most iconic songs of all time* have been revealed
PICS: The man with the biggest penis in the world has one unbelievable problem with it
QUIZ: Can you answer all of Sinead and Daniel's questions on the Irish Celebrity Who Wants to be a Millionaire?
The Falcon and the Winter Soldier has the most powerful scene in MCU history
People think they've figured out the ranking of the viewers on your Instagram Stories
QUIZ: How well do you remember the very first Game of Thrones episode?
The JOE Music Quiz: Week 53
You may also like
4 months ago
Late Late Toy Show hero Adam King to get his own Christmas postmark
4 months ago
Listen carefully, Tubs says he didn't use the F-bomb on live TV... as Toy Show Appeal donations top €6.4million
5 months ago
The official trailer for The Late Late Toy Show is here
7 months ago
The Late Late Toy Show is looking for international singers and performers for the first time
1 year ago
These were some of the highlights from last night's Late Late Toy Show
1 year ago
'I wanted more goof': Ryan Tubridy on the inspiration behind this year's Late Late Toy Show theme
Next Page